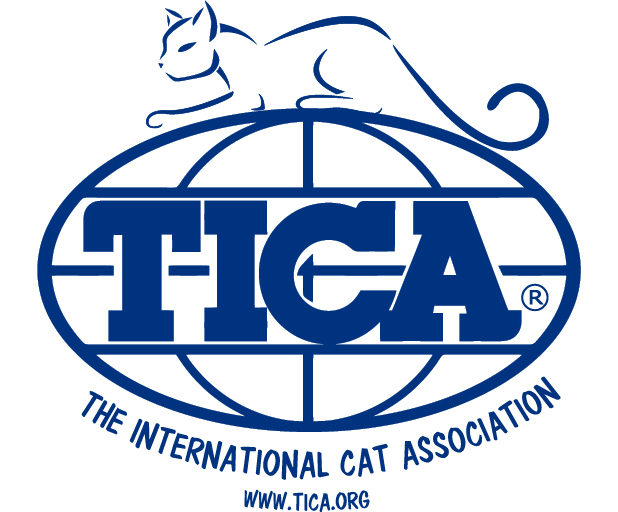 This page, no THESE BOYS, make me giddy with excitement! Look at this group of English Muffin boys!! Hughie, Finnegan, Edmond and now Paxton are the best looking guys I have ever seen. ALL OF THEM!! I just adore them and I cannot fathom picking a favorite from them!! I can't think of a color I cannot get out of one or more of these perfect boys. They are amazing, unique, rare and just plain priceless!!

Let's start with Hughie! Hugh is 87.5% British Shorthair and is a standard munchkin. He is our first English Muffin King. He has the most beautiful, lush, blue golden ticked coat (ay 25). Hughie is the shortest munchkin I've ever had and he has the roundest face and shortest legs. He is exactly what we've been looking for in an English Muffin King. He is such a noble young man that we are so excited about. He has kittens on the way out of two of our best mama queens, Wink and Marigold. Wink's kittens will be 50% British Shorthair and Marigold's will be 93.75% British Shorthair, THAT'S ALMOST PUREBRED! Hugh comes from champion European lines and he and Marigold came to Nevada Rain from Europe. Hugh has kittens here now (September of 2022)!! Hugh is a TICA registered munchkin and his litters will be TICA registered munchkins.

Edmond is our third English Muffin King we've added to Nevada Rain's wonderful lineup of kings. He is as rare as they come. In fact, the likelihood of him is only 1.65%. Edmond has grown into an absolutely perfect Nevada Rain King that we are hoping will produce some absolutely unique and beautiful kittens in early 2023. We're excited to have some Dominant Blue Eyed (DBE) kittens fathered by Edmond. We can have them in cinnamon, chocolate or black, and also in a wide range of colors, depending on the queen. We can't wait!!

Find Paxton, our newest addition to our English Muffin Kings page, near the bottom of this page. He is just a young gentlekitty right now, but he will do really big things here at Nevada Rain someday. He carries the potential to have a wide variety of colors, patterns, and hair lengths in his future offspring. He carries; so we are really excited about the possibilities this guy brings to our English Muffins. According to my calculations, there are over 70 different possibilities in the look of his offspring and of course much would depend on the mother of his offspring as well. Paxton's uniqueness does not simply come from his genetic makeup though, he is an absolutely wonderful kitty. He is sweet, playful, affectionate, comical, and is crazy adorable in every way and will stay that way FOR-E-VER!!
Hughie's Optimal Selection DNA Results
Below you can see Hughie’s FIFE pedigree. Seven out of eight of his great grandparents are BRI, which stands for British Shorthair. He is 87.5% British Shorthair and has several champions on his pedigree. Hughie is such a gem! 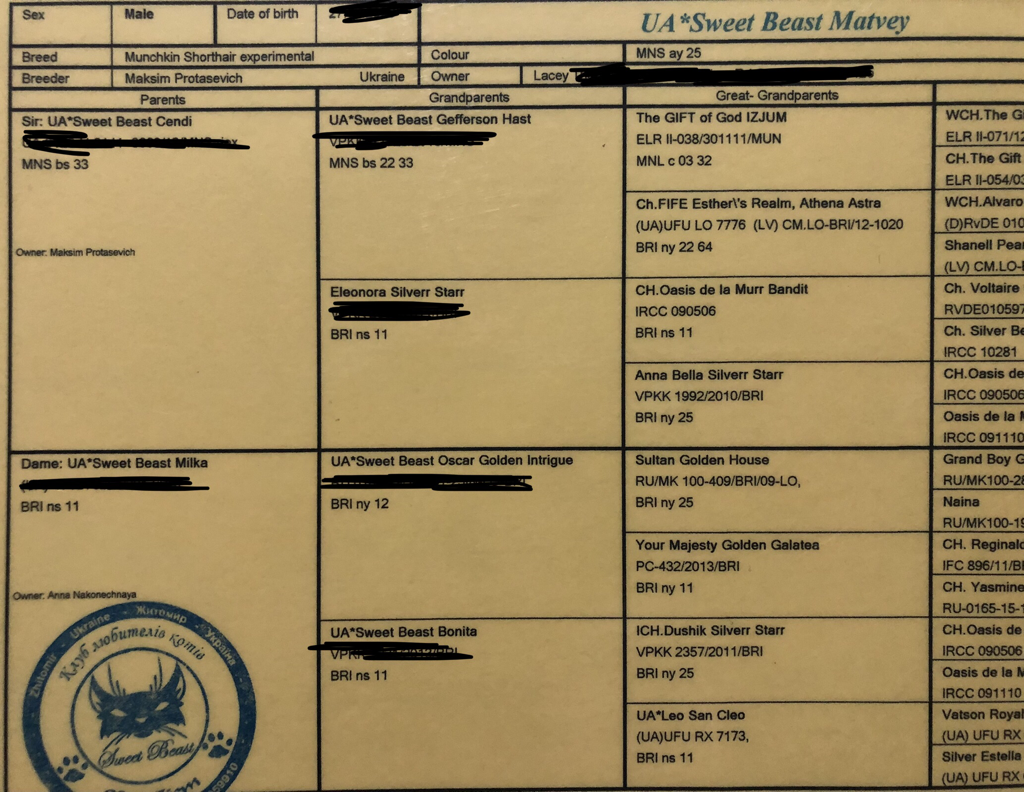 Hugh is a sweet little man. He sleeps between the layers of his blanket. He has the cutest little round face on the planet! Check out the video below! Cute, right?!!

Finnegan: Upcoming English Muffin King: This standard English Muffin (dwarf with short legs) is amazingly handsome. Finnegan is solid white and has odd eyes (one gold, green or aqua eye and one blue). He is 50% British Shorthair and seems to have medium to short length hair. He is growing into the perfection that we want here. He's a sweet, beautiful, healthy, little gentlecat that we hope grows into the most perfect English Muffin on Earth! :) Finnegan has the most amazing personality. He is comical, playful, and starts purring as soon as I pick him up. He loves to be loved on and is a total ham. I just love him! Check back soon for new pictures of Finn. Finn carries the solid white and odd-eyed genes. He also carries chocolate and Burmese colorpoint. Finnegan also masks either smoke or silver shaded. Finn has the potential of giving us colorful litters with excellent personalities here at Nevada Rain in the coming years. Both of Finn's parents have been genetically tested and are clear/clear or negative/negative for all 50 disorders that Optimal Selection tests for. Finnegan is also blood type A,  and carries b (A/b). He's just purrrrfect in every way!!!

We hope to have our first litters out of Finnegan in the spring of 2023. I get inquiries about his kittens quite often and this guy has got it all when it comes to looks and personality. He totally has me wrapped around his little pinky toe.

Most recent pictures were taken the end of January 2023.

Edmond is a total dream boat!! He is 50% British Shorthair, odd-eyed, dominant blue eyed, and standard munchkin. He's as rare as they come, as adorable as they come and is here at Nevada Rain now. Jenna at My Devine Feline has raised a diamond in the rough here and I still can't believe he's ours!! We hope to get solid (non-colorpoint) kittens out of Edmond's litters later in 2022 with beautiful blue eyes or odd eyes. Usually only traditional colorpoint kittens have blue eyes, but Edmond's solid black, chocolate, and cinnamon future kittens can have blue- or odd-eyes as well. Edmond will add his unique twist to our English Muffins here at Nevada Rain. Edmond is DNA tested at Optimal Selection and his results are accessible below. Edmond carries cinnamon, long hair, gloving and the DBE gene, so we can expect to get blue eyed or odd-eyed chocolate, cinnamon, and black kittens. He's also blood group A and does not carry b (A/A). 2023 will be an exciting year here at Nevada Rain!

According to his Optimal Selection results, Edmond carries MPS VI, but because all of our queens are non-carriers of this gene, none of Edmond's kittens, nor Edmond, will be affected by MPS VI. We are pleased to say that Edmond is the only cat we own that carries a single copy of a genetic disorder AND that this disorder will never affect Edmond (because he'd have to have gotten a copy from both parents to be affected by it) or any of his offspring because we genetically test all of our breeding cats. How nice is that!!!? Edmond is a TICA registered munchkin as well!

Paxton is a standard English Muffin (dwarf, short legged) male and the whole reason why we raise English Muffins. This guy is perfection!! He is a chocolate golden spotted, and shaded, fuzzy little droplet of sunshine. He's 75% British Shorthair and definitely carries chocolate, cinnamon, dilute, colorpoint, golden, agouti, the munchkin gene and long hair. I cannot wait to watch him grow and develop into the most adorable cat any of us have ever seen. He's truly one special little dude! He seriously looks like a little golden nugget. We've received his dna results from Optimal Selection and you can access them by clicking on the button below. Paxton is also a TICA registered munchkin.
Status: Staying Here at Nevada Rain
DOB: 4/15/22
​Most Recent Pictures taken 1/15/23
Paxton's Optimal Selection Results